I have worked in a supervisory capacity as a cop for the better part of 17 years. I have supervised uniform cops, detectives, and even a few civilians.

For the most part, cops are type A personalities who are go getters that require little external motivation.

Oh, how the times have changed.

The new breed and the old breed are in a constant state of flux with each side having little or no empathy for the other.

The side with the most power however are the old breed salts who have little patience for the “new” generation.

They collectively label them as lazy, paranoid, un-motivated and un-inspired.

And it’s not altogether their fault.

When us “old salts” were coming up, we had very little worries about being video taped. Same went for the bad guys.

All new cops, especially those labeled with the dreaded moniker of “millennial cop”, know they are always being watched.

“FTO: The Most Important Job in American Policing Today”

Either from their body worn camera or from a citizens cell phone.

And by their supervision.

Note: Within 5-7 years, 90% of all police and sheriff’s agencies will be comprised entirely of millennials.

The one thing universally that both young and older cops can agree on is this.

They both hate being micro-managed.

We are very close but sometimes our views may as well be from different parts of the galaxy. Actually, it was my son and his roommate who talked me into starting this blog (and yes, that’s them in the photo below).

At the time I thought they were stupid.

I mean, an old (but ruggedly handsome) police sergeant starting a blog? 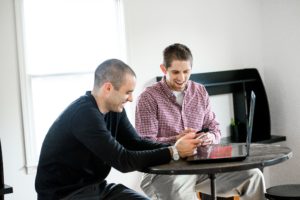 Blogs were for stay at home moms and losers.

After about ten minutes of discussing the idea I was confronted with something I didn’t want to admit.

It was me that was the idiot.

My small thinking, which included shutting down any new idea that didn’t conform with my “old school” ideology, had me locked in a cage of my own making.

What I have learned about leading millennial’s and having one as a son are this.

They are outside the box thinkers who abhor being told their ideas are stupid.

Also, many have endured “helicopter” parents who chart their every move. Every decision, down to the smallest detail, is made for them.

This does not bode well for those millennial’s who become cops.

“Body Worn Camera: The Pictures That Proved a Thousand Lies”

Being a police officer requires a person to make very quick, accurate and effective decisions. Some of these decisions are a matter of life and death.

Not only is being a “micro-manager” a terrible leadership practice, it is exponentially worse when applied to millennial’s.

Some of you may think you are experiencing a glitch in the matrix. Like you have been here before.

No glitch here. This article is based, in part, on a rant I recently posted on social media. That rant seemed to resonate with a lot of my followers.

You see, even cops in positions of leadership like me can be grossly micro-managed. It’s not a pretty sight when you see it.

The equivalent would be catching your best friend tongue kissing your mom at a Dave Matthews Band concert.

Just yesterday I once again observed micro-managing on an epic scale.

“Community Policing and Why It’s Not Working”

It didn’t and shouldn’t have gone down the way it did.

It was probably uglier than the example I just provided if you can fathom anything worse.

If you are in a position of leadership and you desire the absolute best product from those under your charge, here are a few hints on how to NOT sabotage your end game.

Do not micromanage. Just stop!

Meaning, have some faith in your people. If you think that riding their backside like some talon, digging your claws into their back will have better results, YOU are a FOOL.

And for the love of god, do not disguise your micromanaging leadership style as “supervising”.

When you micromanage your subordinates, you are only reinforcing what I have preached ad nauseam in past articles.

You are a control freak who thinks that your way is the only way when in reality it makes you look like a condescending prick (female bosses too) who leads from a place of fear instead of confidence.

Not long ago I supervised a homicide investigation in the city where I work.

The two detectives assigned the investigation did an excellent job. Like most cases, the information initially received was rife with bullshit and complete lies about what went down.

With a little bit of luck and great interviewing skills, the two detectives were able to filter through the lies and identify the bad guy which led to an arrest.

The following day, both of these detectives thanked me for remaining calm during the initial stages of the case.

Most importantly, according to them, they thanked me for letting them do their job and not micro-managing them during the investigation.

They said it was something they were not accustomed to.

I didn’t let it show but it was one of the best compliments I have received in my 24 years on the job.

You can find other ORIGINAL articles like this one and more at The Salty Sarge Facebook Page.

This site uses Akismet to reduce spam. Learn how your comment data is processed.